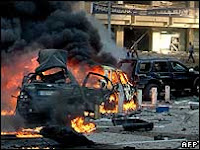 Anti Syrian MP Antoine Ghanim was assassinated yesterday, sparking further tension in the run up to the elections.

Whilst Syria has condemned the killing, many Lebanese politicians blame Syria for his death. Syria has been accused by many of fighting a proxy war with Israel through its support of Hezbollah. Mr Ghanim, a Christian, had been an outspoken critic of Syria and the pro-Syrian President Emile Lahoud. To understand the importance of Lebanese politics in the region, and how Syria’s ongoing influence affects the solution for Israel and the Palestinians, read Pocket Issue, Middle East Conflict.

Is Syria behind the assassination of Ghanim?