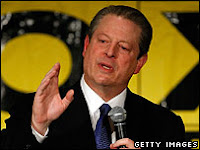 It’s been an interesting week for Al Gore. He started it being ‘convicted’ by a UK judge for having ‘nine errors‘ in his film, An Inconvenient Truth, although the judge ruled that the film could be shown in schools on the proviso that children were given both sides of the argument for each of the nine facts under dispute. Then later in the week he was the proud receiver of the Nobel Peace Prize for his work on climate change, awarded jointly with the IPCC.

What is clear, despite some looseness with the facts, is that Al Gore has done a great deal to raise awareness of climate change. Having said that, we suggest, for a better, more accurate, grounding in the facts, a read of Pocket Issue, Global Warming…and then watch the film.